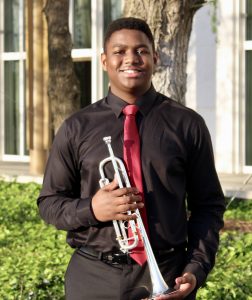 Ben J. D’Haiti, is a 17-year-old musician who lives in Oakton, Virginia. Ben has been a student of music since he was a toddler. He first learned to play the piano before taking up the trumpet. As a trumpeter, Ben has participated in Fairfax County District and Honors bands between 2013 and 2018. In the spring of 2018, Ben was accepted into the Boston University Tanglewood Institute (BUTI) Trumpet Workshop and Young Artist Wind Ensemble in Lennox, MA.  Ben was selected to participate in the National Symphony Orchestra (NSO) Youth Fellowship Program at the John F. Kennedy Center in the 2018-2019 season where he performs with the Brass Quintet Chamber Ensemble. As an NSO Fellow, Ben enjoys the challenge of becoming a better musician and also attending Kennedy Center orchestra, jazz, and opera performances. Ben was again accepted to BUTI and the NSO Fellowship for the 2019-20 season. Ben also currently performs with the American Youth Philharmonic. In addition, Ben won the Fairfax Chamber Players Concerto Competition and was a featured soloist on the Haydn Trumpet Concerto with the FCP orchestra.

He thoroughly enjoys performing as a soloist, chamber ensemble player, and an orchestral musician. Ben currently studies with Mr. Tom Cupples of the National Symphony Orchestra. He has studied with Mr. Steve Hendrickson, National Symphony Orchestra; Mr. Rodney Marsalis of the Rodney Marsalis Philadelphia Brass Band; Dr. Nate Hussell, formerly the principal trumpeter of the Shenandoah Conservatory Symphony Orchestra and Symphonic Wind Ensemble; Mr. Terry Everson of Boston University; and Mr. David Boltz, a soloist formerly of the U.S. Air Force Band. Ben aspires to be a distinguished trumpet player and tries to live his life to the fullest. 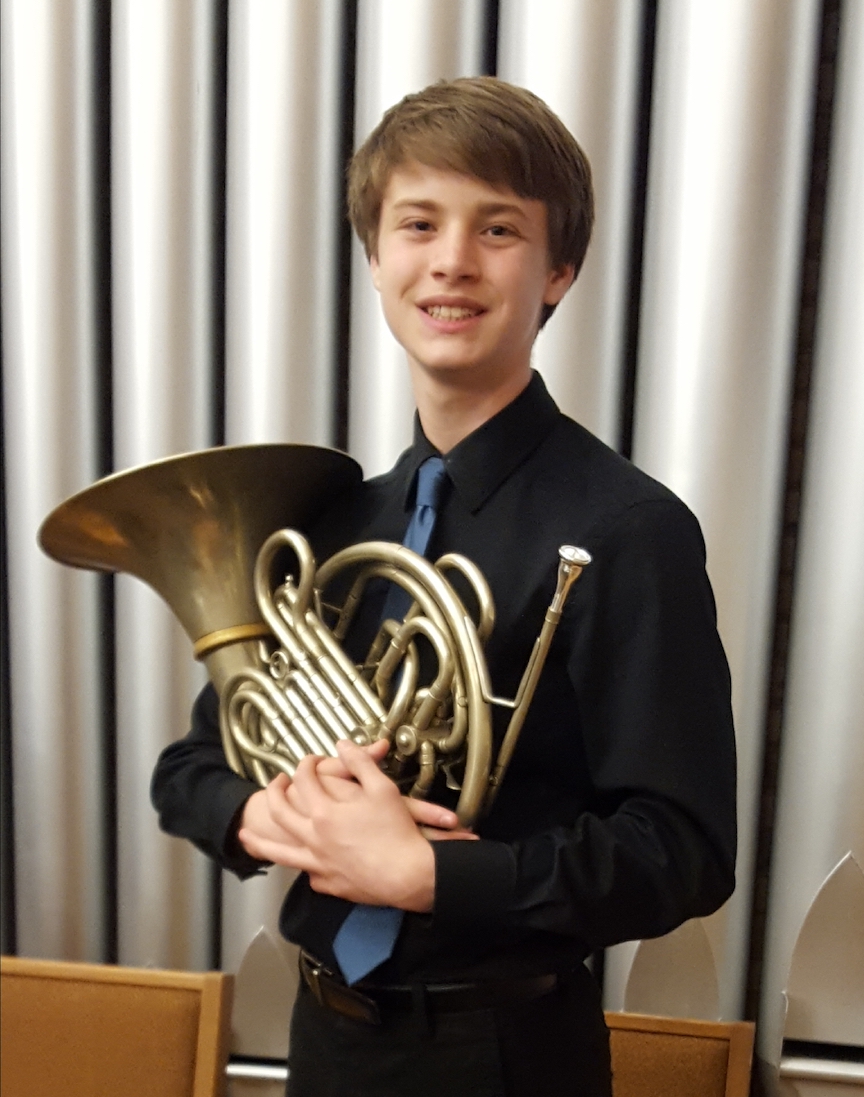 Danny Harkin is a senior at Oakton High School in Vienna, Virginia and this is his 8th year playing French horn, and he is proud to be in his third year with Brass of Peace. He is energized by the quality of music he gets to experience each week at rehearsal. Favorite memories with the group include visiting the Philadelphia Orchestra and taking Masterclass with Jennifer Montone.  Danny participates in his high school Symphonic and Marching Bands and enjoyed a Cappie-Award winning season with their Pit Orchestra.  He is also a member of Virginia Winds Academy (formerly Northern Virginia Youth Winds). He has held principal chair in Virginia District XII Band as well as Northern Virginia Regional Orchestra and been selected to All-Virginia Orchestra each year.  His teachers have included Evan Geiger (Pershing’s Own U.S. Army Band), Shane Iler (Williamsburg and Annapolis Symphony Orchestras) and Joe Cradler (The President’s Own U.S. Marine Band). In his free time, he enjoys summer swim, winter bowling league and hanging out with his 2 beagles.

Rachel Smith-Cohen is a senior at Sherwood High School in Sandy Spring, Maryland. She has been playing horn for eight years and is currently studying with James Nickel, the third horn of the National Symphony Orchestra (NSO). She is ecstatic to be a part of this season’s Brass of Peace and is looking forward to her future of learning and experience with Ms. Alimena. 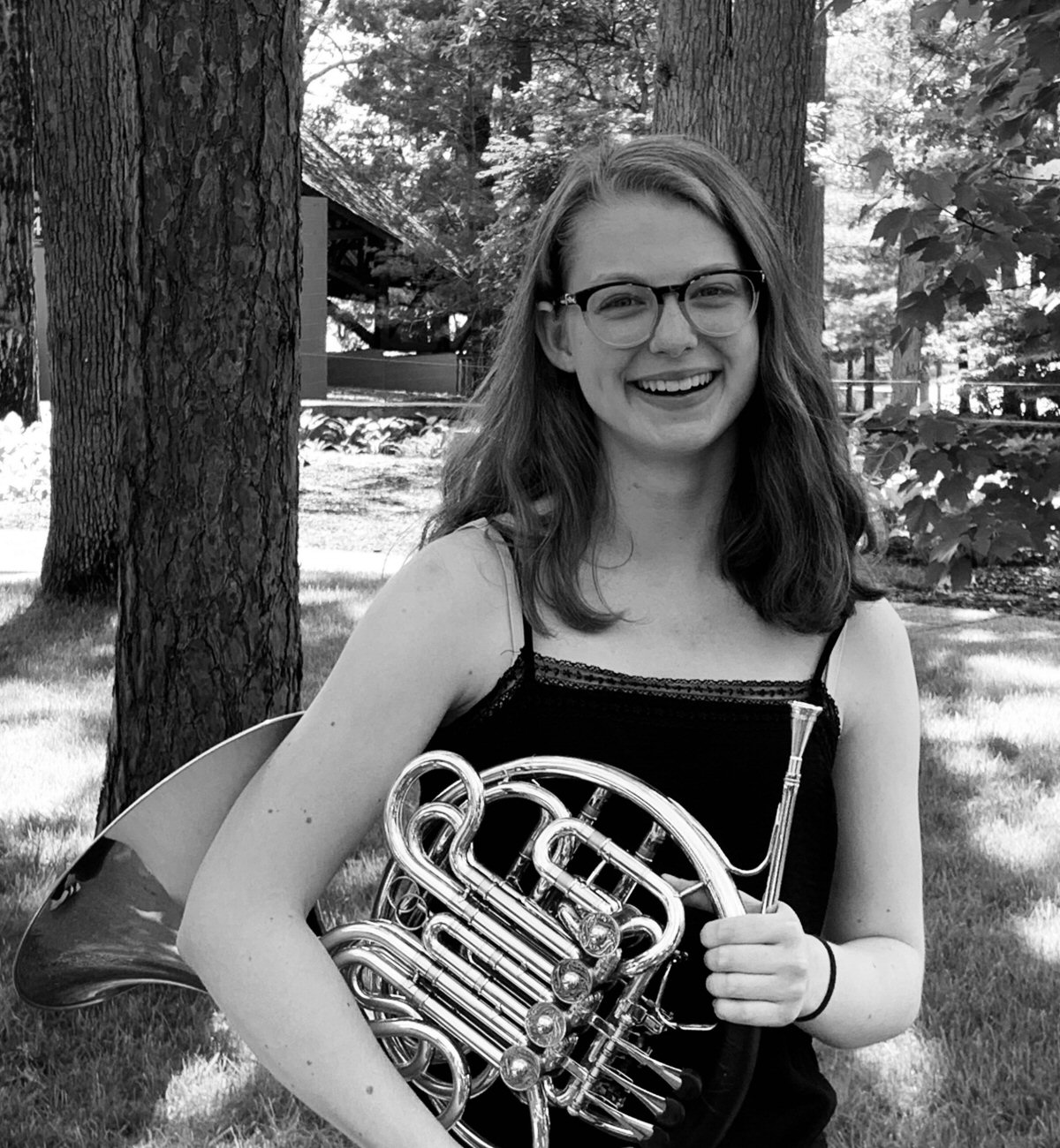 Rachel was selected to participate in the NSO Youth Fellowship Program at the Kennedy Center starting in the 2019-2020 season, and she is a part of the Fellowship Brass Quintet coached by Bob Reardon, a horn professor at the Peabody Conservatory and a member of the NSO horn section. She attended the music arts camp at Interlochen Center for the Arts the last four summers and played with the World Youth Wind Symphony.

At Interlochen Rachel studied under Joshua Michal, horn professor at the University of Massachusetts, Anne Scharer, second horn of the Metropolitan Opera Orchestra, Aaron Given, and Katherine Jordan, the associate principal of the Sarasota Opera orchestra. She participated in the Interlochen Horn Institute 2019 and studied under Corbin Wagner, a horn professor at Interlochen Academy, Julia Pilant, Assistant Principal Horn of the Metropolitan Opera Orchestra, and Richard Deane, Principal Horn of the New York Philharmonic.

Rachel also participated in Maryland All-State Band for three years and is Co-Principal of the Maryland Classical Youth Orchestra Philharmonic. She thanks Jonathan Eising, who taught her for six years and has pushed her to be the musician she is today. Until recently she studied classical ballet for many years through preprofessional level. Now she enjoys spending her free time with family and friends and doing yoga.

Jack Earnhart is a musician from Fredericksburg, Virginia. A versatile performer in solo, chamber music, and ensemble engagements, he is currently a student at the New England Conservatory of Music in Boston, Massachusetts majoring in Euphonium performance. He is the principal euphonium player of the world-renowned New England Conservatory Wind Ensemble, under the direction of Charles Peltz. Developing a passion for teaching at a young age, he maintains a regular schedule of students. He has also given numerous seminars concerning the mechanics of the brass embouchure. Earnhart is fortunate to have studied with many noted teachers, including Norman Bolter, Bryan Bourne and Mike Roylance.

Earnhart is active in multiple facets of the music industry. His interest in the design of brass instrument mouthpieces led him to establish his shop in March of 2020, where he specializes in custom work. In the near future, he plans to propose an acoustic study of mouthpieces to the Massachusetts Institute of Technology in Boston (MIT). The study will question the previous assertion that certain pop frequencies (fpop) produced by a mouthpiece dictate the timbre and partial slotting tendencies of a mouthpiece.